We are coming into the last week of the project now and most of the elements we need have been created. The character design (below) is being vectorised by Ceri, as most of the main characters have been, to make them stand out more. The rest of the crowd, including the people coming off the train, is currently being drawn up by myself using watercolour. I intend to keep the detail of these characters to a minimum in order to create a vibrant atmosphere and not detract from the main characters. 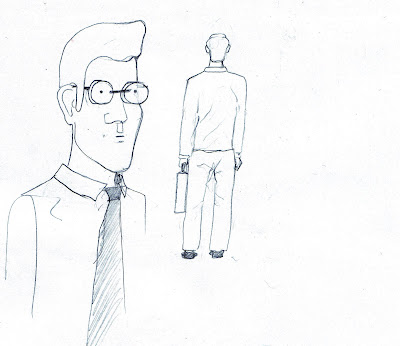 This character is only to be used in the opening shot, when the train is coming to a halt. After which the camera will be in first person.

As inspiration for the interior of the train I looked at the work of Studio Ghibli, having remembered a scene in the film “Spirited Away” in which there is a fascinating scene, where the characters are returned to some kind of normaility of a train journey. 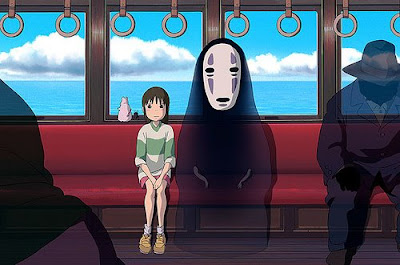 Apart from this influence I have abstrained from using any other sources of inspiration directly in an attempt to illustrate my own interpretation of trains that I have taken in throughout my life. I feel that by drawing purely from this melting pot of things I have noticed I can depict what is both a personal and encompassing viewpoint of the atmosphere you get on a train. This is definitely an advantage of drawing purely from memory, but can sometimes be hard to pull out or make realistic (if that is what you are aiming for).

The inside of the train is also close to completeion. I was slightly concerned about the perspectives between the view down the carriage and the facing door inside the train, but when they are in motion this distortion is not that recognisable. I intend to disguise this even more by using a motion blur.

The only thing that remains is the adverts that line the isles which I intend to design myself, to give a little attention to detail. Hopefully I can think up some quite satirical renditions of modern day adverts and culture.