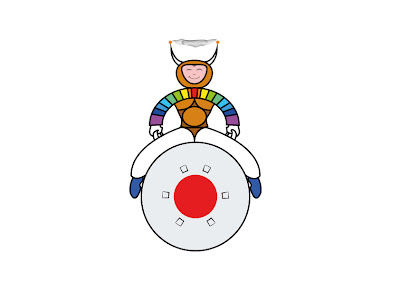 This character I designed to be a happy explorer of galaxies, travelling through many different layers of stars. This idea was mainly inspired by trains, the song by Air and possibly Astroboy (the hugely popular Japanese cartoon). Keep tuned in for the storyboard development and to see this guy animated! Animating vectors isn’t impossible but always abit finicky, therefore I am first going to experiment with hand drawn (light box) animating. The background will be a mixture of 3D, like the Earth you have seen and some after-effects. I will probably keyframe the character movements to get him to respond differently to different tempos for reactive sound but these will probably follow from the narrative I am hoping to develop in the following week. Essentially the story is about the character’s journey through space where he comes across alot of space-junk which comes to life through his imagination, where he uses the animated, newly found resources to overcome some hairy obstacles on his route. At the moment I don’t think the character is cute enough, I had envisaged him as being quite child-like and small rather than a super-hero. I guess that’s because children are seen as having the most wild imaginations compared to a super-hero, who can only really approach things from one angle, that is the angle they have developed or grown into. The song I was thinking to animate to seen as the animation will primarily be in corresspondance with the music. The background is central to the animation whereby each instrument will be represented by a different form/set of colours. Check out this brilliant but quite outrageous video produced by Jérémie Périn a fantastic young animator, but obviously quite messed up in the head!

FLAIRS – TRUCKERS DELIGHT from 3rd Side Records on Vimeo.