If I am honest, as I said I would try to be with my blog, I was very disappointed when I heard we would be making animations for the BBC. I realise that it is an excellent opportunity for people to see the work we are doing, and in collaboration with an obviously very high standard of writing and sound engineering (from the samples we recieved). However, I feel that the areas that I wanted to develop in have been completely hijacked by the BBC, as has my personal progression as an aspiring artist. I had many ideas that I wanted to develop, all of which are at the other end of the scale to story-telling and cartoon style animations. Despite my gripe with this brief, I felt it necessary to bite the bullet and I take comfort in the fact that I could be creative with the style of the script that I chose, which was the underground/tube instruction animation. I am very pleased to be working with Nat and Ceri, both of whom I appreciate as artists and hope that our individual styles will work well together.

Initially I had a few good ideas about the kind of style I wanted to push forward for the project. A general consensus appeared to have the interior of the train and backgrounds as clean and simple as possible, in the style of an emergency instruction manual. E.g. Below. 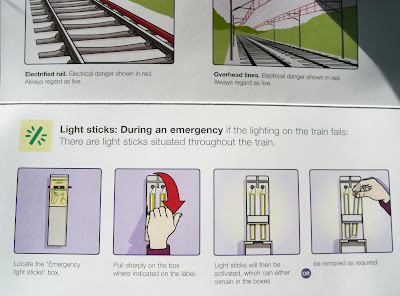 In contrast to this I thought that a line-drawn, sketchy kind of depiction of the characters would look really nice. If you can imagine a similar style to that of Erica Russell’s, but with a little more detail. As an idea, I don’t think the other two bought into this so much, especially as line-drawn animations are notoriously difficult and laborious to achieve. Instead we agreed on simplistic cut-out style characters which we would split between us. I was asked to create the main character, who would only appear for the opening scene, after which the camera would go into first person. Aswell as this I was asked to design the interior of the train, taking into account the camera movements and seperate angles. In terms of colour I imagined very high hues, giving a feeling of intense lighting and low saturation for a blandish kind of look.

In addition to this I had an idea to animate the hand cursor (being a mock interactive interface) with certain expressions to fit in with the story. I hoped this might give a point of interest to the interactive side of things and also to make something a little more alternative to your average cartoon style animation. 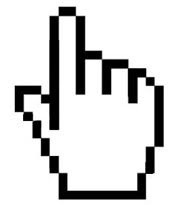 I think that it might be easy enough to act out the movements/expressions with my own hand, then simply pixelate it, to appear like the white glove you see on computer interfaces.