Having watched a few experiments on the effect of sound waves/ vibrations on water I have learned that at different frequencies the water forms different shapes. Many of these forms are recognizable as symbols of some religions. Unfortunately I am not in the line of thinking that it forms these geometric shapes as a result of these religious symbols, rather that they have been harnessed as encompassing forms of nature. Below is an example of one of the simplest combinations of two shapes, known as Metatron’s cube. You may see some similarity to the star of David, the symbol commonly affiliated to Judaism. 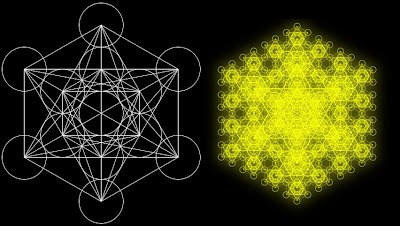 The combination of two triangles in this symbol, is significant in that it is the combination of two of the simplest geometric shapes but also the strongest geometric shapes. It could be feasable therefore that water takes on this form simply because that is the most stable structure it can form without dispersing. During my first term, I produced a 2D animation, animating the formation of this shape, then the dispersal of the individual corners of the shape into seperate pools. This touches on the idea of fractals, found also in the formation of snowflakes.