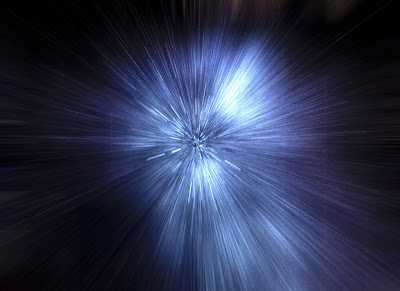 Lightspeed rendition taken using the canvas painting I made a few weeks ago. The result of extra exposure and a radial blur, this reminded me of the effect used in the Star-Wars films, which was actually developed by John Whitney in the early days of CGI. I really like the high speed effect of this blur and animating it would not be too dificult, simply by exporting a cumulative blur then putting it into Flash. I am currently working on the idea of having some kind vessel travelling in 3rd person aswell. Dean Moore a VJ I am currently collaborating on this idea with has also suggested animating panels and structural parts building up on a wire frame of the vessel as it is travelling through space.