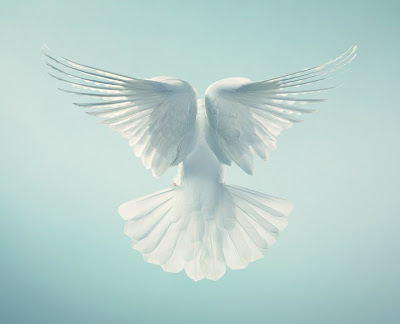 I was lucky enough to have been invited to the Tim Flach Photography exhibition in Shoreditch on Friday. Having never heard of Tim before, I was astounded at the quality and clarity of the aesthetic in his work. The subject matter is entirely made up of animals in their purest frame of ideology, reaching an almost dream-like state where perfection and purity of image not only resonates within the soul of the viewer but also sheds new light on any preconceptions he or she might have had of the animal. The meticulous process is clearly a passion of the artist’s and we begin to see the interaction between the camera and the subject, giving incredible insight into the soul of each animal that is the very essence of it’s being. Speaking with Tim I could see that his intentions were grounded in a study of the animals, not dissimilar to that of a scientific explorer, whereby the interaction between the camera and the animals follows not only from Tim’s study of the animals but the shared journey between the animal and Tim in setting up each shot. The picture below surely demonstrates this point, where both Tim and the equine subject would have climbed the mountain together, and together witnessed the sun setting over the clouds.

The sheer refinement of quality and attention to detail is surely the most telling aspect of Tim’s work however, where images that super-seed the detail available to us with the naked eye reveal a whole other dimension to the natural world that surrounds us, if one considers the notion of scale as another dimension. In addition to this, the way in which these details are portrayed is so refreshingly natural and stunningly beautiful we must give credit to the artist. The third and final image I have chosen was a real favourite of mine and I was lucky enough to be in the presence of the artist when viewing it for the first time. It shows a collie sniffing out two pheasants who are spiralling up away from the camera. The incredibly dramatic lighting and skies give this photograph a surreal yet completely natural and earthly feel that really struck a chord with my perception of the countryside and nature. I later learnt from Tim that the collie infact belonged to the aristocratic Guinness family and this shot was taken on one of their estates in Ireland, which would certainly explain the bleak looking sky. I think that the inclusion of the environment here helps to bring out the truth in the scene, where the bounding collie is familiar with the heathland territory and the pheasants are within their natural habitat. Needless to say that it is a an absolutely astounding moment within a very beautiful environment, but one could also say that Tim is becoming part of this scene, yet instead of a shotgun he is shooting a camera, perhaps this, in my view, is possibly the secret to the success of this image, but also sums up the way in which Tim works, whereby he is not simply passive but becomes part of the life that bursts out of each photograph. 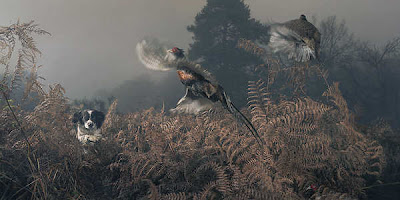