Party video I was asked to create as a stage backdrop for the Lycamobile, Egyptian themed Christmas party. I was show the stage layout before-hand in order to ascertain how the videos would play out on the night (below). 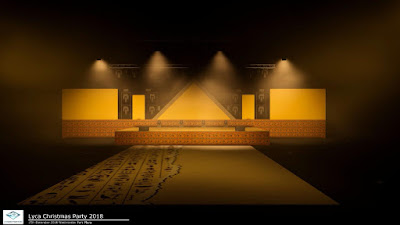 In the end I produced two 10s messaging videos that could be played in a loop or paused ast the end to keep the stone hieroglyphic doors present before and after the video messgaes. By using the newest Trapcode plugin for After-effects I was able to add real physics to the gold dust symbol that gives the video a luxury, sophisticated and blinging feel.