Having being briefed on the animation festival, and having seen past year examples, we began brainstorming ideas for a short 30 second ident. One of the first ideas that was put forward with some conviction was Ben’s “Coo-coo clock”. The idea of clockwork seemed to fit in well with the festival and furthermore an opportunity to develop a character in the coo-coo bird. We then learned that through Ralph’s local knowledge of Exeter that there stood a statue of a phoenix outside the main theatre of the festival. This seemed to reinforce our direction and we decided to go away and develop the visual style and any of our own additions. Initially I had envisaged trails of solid colour behind the bird after it left the clock. I put this forward in our next meeting, and was given the task of depicting the scene after the phoenix had left the clock. November the 5th passed and through some spectacular fireworks I was inspired to depict the ending scene as an explosion of colourful fireworks.

I began to work out the technical viability of the final scene, and realised quite early on that the surrounding environment i.e. the clock tower. would need to be lit up in time with the explosions. This was not necessarily a difficult effect to achieve, but I felt it would be vital in making the scene look believable.

Meanwhile I was also developing the background landscape for the opening long-shot. I imagined a fantastical and vivid combination of simple lines and colours. Ben also had a strong idea of the kind of style he wanted and I tried to take on board his envisagement by studying some references he gave me, such as the early 20th century artist, Ivan Bilibin. Strong and colourful patterns and a very distinctive colour palette used by Bilibin would certainly give the vivid and almost mystical style we wanted.

Initially I put together a basic layout of the landscape, just to assemble some structure and composition. We decided to create a library of elements that we could then layer up in photoshop. I felt this was a good idea at the time as it would allow us to chop and change the background as we pleased. However, In the end we decided it would be much easier to put all the foliage together into one slide. Using Holly’s developmental drawings and some of Bilibin’s organic patterns I compiled the foliage like this. 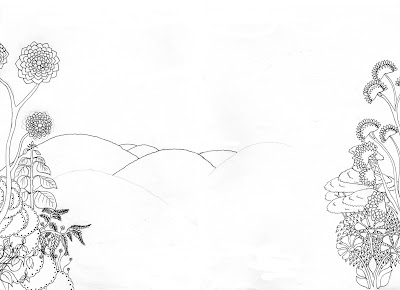 I also had the idea of including a waterfall, which I had learnt to do from a Starwars documentary on the special effects used, by filming sugar crystals on a black background. The end result was extremely satisfying, but when putting together the background I decided that the rock formation required to house the waterfall would not really look consistent with the rest of the landscape. Nevertheless, below is some of the raw footage from this experiment.

My first drawings that included a few tors (rock hills) that I felt would be recognised as an Exmouth landscape, were not really in keeping with the style of the animation or Ben’s vision. I found it quite difficult to adapt my style of drawing for the ident but I think that it came off quite well in the end and looks very stylish with the abstract sky and clouds.

This also made me realise the problem encountered when working with a number of people on the same animation, when a team effort is often required. That is, trying to keep a consistent style throughout the piece, even though numerous people with different styles will have been working on it. I suggest that great importance is given to the segregation of the animation, and which bit is given to whom, and whether it should be separated scene by scene or into small details, as we tried to do with the background elements. I know that in the film industry, people are employed specifically for the job of making things consistent throughout a film i.e. a continuity adviser. By using the same colour palette throughout and comping the animation together with the same filter the differences in styles should not be too noticeable. Unless of course we are looking to emphasise the different styles that can be achieved through animation, using different types of animation i.e. 2D, 3D or stop-motion. This is something I will have to quiz Ben on when comping the animation.

Overall I think that when it eventually comes together the animation will look great. It had been a long and winding road with some confusion about what type of shots were required but this was inevitable with a mixture of animation methods.