For some time now I have been exploring the idea of the role of sound within animation. I am also exploring the idea of harmonisation between sound and light and what the outcome of this may be. Both natural energies have a spectrum of frequencies which the human brain is able to pick up and interpret. Music can be sectioned into specific wavelengths using an equaliser. Conventional music visualisers also use an equaliser by measuring the amplitude of each frequency then relaying them as a graphic line or bar. Visualisers use algorithms (mathematical equations) to translate sound measurements, sectioned into layers, into graphical images.

Magnetosphere revisited (audio by Tosca) from flight404 on Vimeo.

The new Itunes visualiser, “Magnetosphere” is a briliant example of a 3D equalisation, algorithm, music visualiser.

Although a graph is arguably the simplest and clearest form of displaying data, I am also sure that it is not the most immediately understandable visualisation of information. In an attempt to find new ways of visualising sound I have begun to explore the possible parallels between sound and light, and although I am not sure it is scientifically feasible to compare two different sensory elements I feel that these links might provide a more immediate recognition of sound, through light:
<>=is to

Also the way in which sound and light is echoed and reflected by physical matter is quite similar, although far more important for perception of light. It may be quite interesting to experiment with sound echo and how much the initial sound can be changed.

In the simplest terms what I am trying to develop is the possibility that:

Theoretically, if these properties could be synchronised, I am hoping that a harmony of sound and light can be reached, or possibly a fusion. It is difficult to know how or if the human mind could even be able to experience such a thing but I am hoping to gain some insight into this through the study of a condition called synesthesia. Kandinsky, possibly one of the most famous artist’s in history with the condition, painted many abstract soundscapes. He named them after the symphony or piece of music that he interpreted.

Another well known synesthesiac, Richard.D. James, better known as Aphex Twin, whos complex, layered symphonies have often given me great inspiration. He has also bridged the gap between sound and light, using an electronic spectrometer . James often uses his own face in music videos often in an extremely sinister and vile context, contributing to the dark image he has developed.

Interestingly the face is possibly the most instantly recognisable and communicative forms to the human mind, however it is simply a reflection of light, not a light source.

The above video shows the incredible feat of creating a recognisable visual image through sound, translated by the electronic spectrometer. Although it is extremely haunting, I feel it is a breakthrough in the field I am looking at. Even though it is just effectively lines on a graph, sound-engineered to look like a face. It makes me wonder if James used drawing tool that translates spectrometer lines into sound, but as he is a sound artist I guess it is probably the other way round.

Another collective of artist I have come across in a similar line of work is the graphic depiction of magnetic fields on a filmed background. 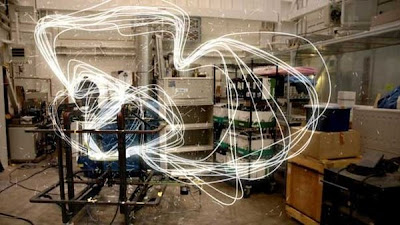 One of the first people to demonstrate the shape of a magnetic field was the scientist Robert Hooke. Using iron filings placed around a small magnetic ball, he hoped to demonstrate the shape of the earth’s magnetic field. Magnetism is a prime example of an energy/force that we cannot see but we know is there. It is only through the medium of another material that we are able to see what it might look like. This animation produced by Semi-conductor films demonstrates how magnetic fields might look if they could be seen. This links together with my idea that different types of energy can be somehow related and visualised into what we can see. Detailed research was conducted by the collective into how magnetic fields behave then illustrated as lines of energy, mainly through interviews with various experts in this field. Not only is the artwork interesting to look at, obviously with some aesthetic consideration, but also might serve some educational purpose in demonstrating to budding scientists how magnetic fields look. Whether or not there depictions are accurate or not is debatable, but the work is more impressionistic rather than an actual diagram of measurements.