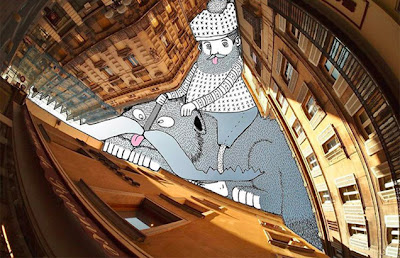 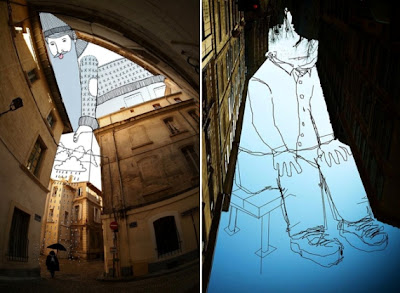 Initially I thought this could have been netting with material suspended but I was wrong. It could have been to do with a mention of Banksy stencilling techniques from Jake Wells; a fellow admirer of street art. But no, it is indeed just immaculate drawings with stark contrasts that at a second glance, perhaps appear as a flock of birds, leaves in the wind or even just a face in the clouds. The awesome spectacle that is our sky deserves the attention of wonderers and provides insight into meteorology. This backdrop is combined with bold strokes almost etched into the sky. The Parisian architecture frames the whole thing beautifully and interactions between the subjects and this energetic street environment is splendiferous and achieves an awesome city feel with a continental vibe I personally love. It reminds me of some sketches I made of Plaza Villa de Paris near Colón, but the characters in this are really well portrayed, I think perhaps not even to likeness of people. These characters tower over the scene in an almost godly way, but also reflect the image of the artist Lamadieu. The real success of this idea is the canvas which challenges the rectangular format we are so used to seeing as picture-frames and screens. It works on many different levels but the most intriguing for me is the contrasting nature of the subject’s person and the infinite nature of the backdrop, which could be seen as a representation of out existence in the city environment.