It is the last week of the project and things are starting to come together. Having finished the interiors, I fused together the outer chasis of the train (Ceri’s vector art) with my interior (watercolour) for the opening shot of the people leaving the train. I am extremely pleased with the result (below), having being slightly concerned that the two styles would conflict. 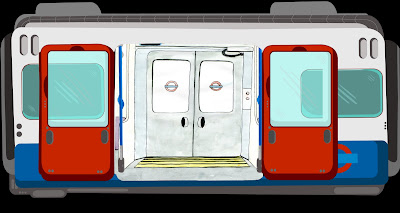 I think the clean exterior and the slightly stained interior reflect the actuality of a train’s construction quite effectively. The animation of the crowd leaving the train is also proving to be quite a challenge, but with the use of a Fast radial blur, I think it will look nice and colourful once finished.

I have also completed a test on the cartoon style (exaggerated) throbbing of the main character’s hand after it has been crushed by the “oblivious man”. At the moment it is inbetween looking conmpletely ridiculous and quite realistic. i.e. it is believable enough to be real but not exaggerated so much that it is meant to be a joke, which has resulted in an extremely stomach turning display, especially with the addition of purple veins. In addition to this I will have to animate the hand being crushed and the oblivious man’s position in the background.

Moving through the train has not presented a problem so far but I imagine a simple zoom combined with a walking rock (in addition to the train shaking) will give a convincing outcome. Ralph has also informed us of a method of recording what the mouse is doing (live) whilst the animation is playing. This will obviously save us alot of time, not having to animate each and everymovement, and will undoubtedly be more realistic.